Who is Robin Vernon?

What do you do when you do nothing? You probably watch TV and enjoy a number of popular shows about cars on the Discovery Channel. Well, “South Beach Classics” is yet another show that depicts how car dealers operate. Robin Vernon was a part of this show, especially because of her relationship with Ted Vernon, who owns and runs the “South Beach Classics” car dealership. Robin, his now ex-wife, was a model before partnering with Ted in this business venture. Born Robin Ziel on 11 April 1968, in Fort Lauderdale, Florida USA, she is also an actress, however, if it wasn’t for Ted, we probably wouldn’t have heard about Robin at all. So we will share with you all there is to know about this prominent television personality, from her childhood years to most recent career endeavors.

What Happened to Robin?

In 2017 she and Ted divorced, and Ted was hit with a restraining order and is now permanently prohibited from contracting Robin. So, where is Robin now? Since leaving the show and her troubles with Ted, Robin has avoided public appearances, though she is still connected to the South Beach Classics dealership as the co-owner alongside her ex-husband. The two have continued their fight, with Ted is doing everything to become the sole owner of the entire company.

Robin was educated at Torrejon American High School, during which time she was on the cheerleader team, becoming a rather successful cheerleader. She spent her teen years with her mother, as her parents divorced when Robin was ten years old.

Even before she finished high school, Robin launched her modeling career; at just 17 she was already a prominent model, and with her bleached blonde hair secured a number of modeling deals. However, years later, she would reach stardom, mostly thanks to her now ex-husband, Ted Vernon.

Robin met Ted on a blind date in 1998, and the two hit it off almost immediately. Gradually, their bond became stronger and two years into their relationship they tie the knot, in a Buddhist ceremony in 2000. The couple remained married until 2016, during which time they welcomed a son named Ted Vernon Jr. The couple started a business venture, Ted Vernon’s Specialty Automobiles, which grew to become South Beach Classics.

Gradually Ted’s and Robin’s venture grew, and they were approached by producers from the Discovery Channel in 2011, which resulted in the show “South Beach Classics”, actually debuting on the Velocity Network. Since the premiere, the two became quite popular across the US, making them both stars. However, it wasn’t all milk and honey in their relationship, and problems started to arise. One customer saw Ted choking Robin which was later reported to the producers, and their relationship reached a new low in 2016 when they started accusing each other of cheating. Their broken relationship affected the show, which was then canceled in 2017, although Robin hadn’t appeared in the last season of the show at all, as her relationship with Ted was already finished. 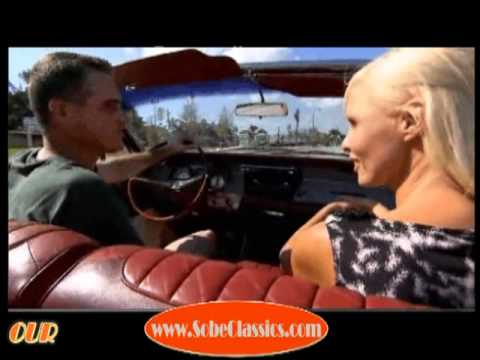 Although a model and cheerleader at first, Robin became an extremely successful businesswoman and television star. She has also tried herself as an actress, and featured in several films, including “Hell Glades” in 2013, and “Bikini Swamp Girl Massacre” in 2014. So, have you ever wondered how rich Robin Vernon is, as of late 2018? According to authoritative sources, it has been estimated that Robin’s net worth is as high as $2 million, accumulated from her modeling, acting, the car business, and the TV series.

Over the years, Robin has become quite popular on social media platforms, especially Facebook and Instagram. Her official Facebook page has over 140,000 followers, with whom she has shared her most recent endeavors, as she continues to co-own and co-operate the car dealership. You can find Robin on Instagram as well, however, she is yet to build a fan base, as she only has around 2,600 followers. So, if you aren’t already a fan of this prominent television star and businesswoman, then this is a perfect opportunity for you to become one, just skip over to her official pages.

Now that we have shared all there is to know about Robin, let’s share some information about her ex-husband Ted.

Ted Vernon was born on the 17th of October 1948 in Long Island, New York USA. He had a tough childhood as his parents divorced and this further lead to frequent moves across the country. He attended several schools and had problems with his mental health, spending time in a mental hospital. He showcased aggressive behavior from an early age and while in high school he joined the wrestling team as he felt it could help him with his problems. Before he became a successful businessman, Ted worked with his father in the real estate industry and was also a professional boxer under the moniker Wolfman. Actor and producer of low-budget horror films, Ted forayed into car business as it was his only true love. Since then, he has become extremely successful. Ted Vernon’s net worth is estimated at $15 million.  Before Robin, he was married once before and has two children from that marriage.